I've written a couple of articles for this newsletter. I like them! If you're interested in subscribing (it's FREE), drop them a line. The address is at the bottom! 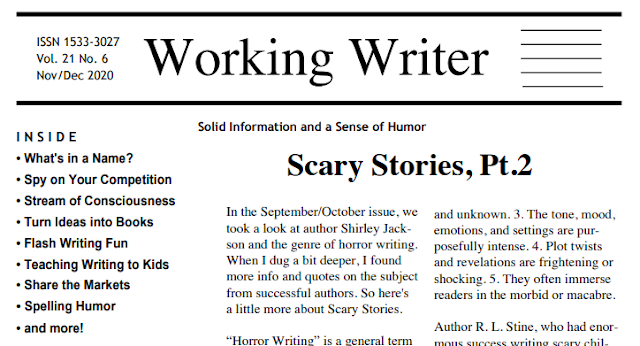 “BUT I’M NOT AN ENGLISH TEACHER!”
(Teaching Writing for Fun and Profit)
by Guy Stewart
“I’m a writer,” I say.

“What kind of stuff do you write?” they say.

At that point, I get a stupefied look and the questioner wanders away to find something more interesting to do.

I’ve been teaching a summer school class called Writing To Get Published, as well as guesting at writing workshops for students, for the past 23 years. I’ve worked with grades 4 through 12 and shortly, I’ll be starting my 24th year, this time a COVID-19 online class.

The class (and the workshops) are all paid gigs. I get an embarrassing amount of money.

I proposed Writing To Get Published (WTGP) as a survey course, to a district that provided services for gifted and talented and special needs students. Over the course of a week of day-long classes, I proposed to lead the kids through a sampling of different kinds of writing.

They bought it, and since then I’ve followed the same formula. Each day, during a morning and afternoon session, I do an introduction of the subject for the session, then lead the students through some exercises and discussion. Once they seem comfortable with it, I set them off on assignment for an hour or so, then I’ll refocus them and have them share their writing. The rest of the time they’re able to work on the assignment.

Seem pretty vague? Not worth the time and fees from the family?

Yeah, given that bare-bones description, I’d have to agree!

How about a bit more detail?

Even though I’m not a poet, I begin the week with exercises in poetry. I confess that I’m a horrid poet (with an aside that I’ll shortly prove it to them!), but learning to use the precise word you need to convey an idea and a feeling in any kind of writing, is an important skill. Mark Twain opined, “The difference between the right word and the ALMOST right word is the difference between a FIRE and a firefly.”

Using a slide show (Power Point or Google Slides), I skim through the various types of poetry. Then, putting down the clicker, I organize the kids and we head outside for a series of practice sessions. We stop at a fire hydrant and sit down and I give them 90 seconds to write a poem in any form, about the hydrant. When we’re done, I ask if anyone wants to share. Mostly, they just look at me in terror until I point out that the class is about writing to get published – and that means that OTHER people will read their work!

That usually sets lose a few brave souls and I give them encouraging words. We move on to a nearby sports complex, talk about athletics, and I ask for a 90 second poem about their favorite sport (or if they HATE sports, a poem about “Why?”). A poem where they close their eyes, then write about what ELSE they heard, smelled, tasted, or felt; followed by a nature poem from a suitable vantage point.

We return to the classroom where I talk about the possibility of SELLING their work and I tell them how much I was paid for my most lucrative story. Thunderstruck, they are “in the palm of my hand” for the rest of the week.

We go through an amusing exercise in metaphor and then I give them some hints on using one of the metaphors to craft a poem. That’s when I inflict upon them a dreadful metaphor poem I once wrote that included the phrases, “…rock hard spit” and “…’til bunnies spring from cage and hutches…”

They usually try to console me that it isn’t that bad. I then point out that they can be honest with me because I’m going to be totally honest with them when I assess their work. The point of the class is to GET PUBLISHED and many, many people want to be published writers and the competition is tough. That’s when I tell them that I’m not their English teacher – I’m a published writer and I’d like them to join me. While the number isn’t overwhelming, some thirty WTGP students have gone on to have their work published, some even getting paid! The students who DID get published learned to listen to people who honestly wanted to help them become published writers.

After the chat, I release the kids to continue to write poetry.

Oh, I should add that I don’t let them write ANYTHING that we haven’t already done in class – so at that point, they can only work on poetry. Later in the day, we play with journalism and I have them write some of the bizarro stories you might find in the WEEKLY WORLD NEWS. That’s great fun and by then, the kids are relaxed and willing to share their work.

I also post their work to a simple e-blogger site where parents can see what they’re doing. During the course of the week, we play with interviews, personal essays, letters-to-the-editor, “how-to” articles, markets, letters to authors, fiction (they tell me they don’t need my help, thank you very much!), storyboarding, dialogue and scripts (which led to my first ever experience with the entire class acting as “staff writers” of a telenovela (which was INCREDIBLY FUN FOR ALL!), writers block, generating ideas, and finally rejection…

The class is not only rewarding, but challenging for me. I don’t just sit around while they’re writing poetry. I force myself to do my own lessons. During the fiction unit, I have them write nano-fiction (149 spaces, in toto) using a small worksheet I hand out – and I had a piece appear in Nanoism (https://nanoism.net/writer/guy-stewart/) as a result.

The point of all this, is that you, too, can find a way to put your writing and teaching skills to good work. Not everyone is made for teaching, but if it’s something you’ve always wanted to try, structuring the class as I did may lead to a long (and somewhat lucrative…certainly bringing in more income than my writing itself!) and enjoyable side-career.

If you have specific questions about how to start something like this, feel free to email me at gstewart75@hotmail.com. Now, get to work at that new article or piece of flash fiction!

Posted by GuyStewart at 4:15 PM

GuyStewart
Guy Stewart is a husband supporting his wife who is a multi-year breast cancer survivor; a father, father-in-law, grandfather, foster father, friend, writer, and recently retired teacher, and school counselor who maintains a SF/YA/Childrens writing blog by the name of POSSIBLY IRRITATING ESSAYS that showcases his opinion and offers his writing up for comment. He has almost 70 publications to his credit including one book (1993 CSS Publishing)! He also maintains blogs for the West Suburban Summer School and GUY'S GOTTA TALK ABOUT BREAST CANCER!